Birds of the Bay

Twice a day, the tide retreats out of Morecambe Bay, uncovering miles of mud, sand and rocky skeers. This area is called the intertidal, where buried in the sand and mud are millions of small invertebrates like cockles, crabs and worms, which act as a vast intertidal buffet for wading birds like knot, oystercatcher and godwits, whose long beaks and legs are perfectly adapted to feeding in the mud and sand of the Bay. At high tide dabbling and diving ducks like eiders, shelduck and wigeon feed in the shallow waters of Morecambe Bay. The Bay is a prime destination for birds escaping harsh Arctic winters, and a perfect pitstop for long-distance migrants on their journeys further south. At its peak, Morecambe Bay hosts almost a quarter of million birds, all here to feed and build up their energy reserves to survive the winter and prepare for migration.

The edges of the intertidal area are made up of shingle beaches, sand dunes and saltmarsh. These places are important for coastal birds all year round. In the winter they are roost sites - places where waders can rest at high tide, and form flocks of several thousand. It is here where Morecambe Bay’s most impressive wildlife phenomenon can be seen - the wader murmuration. As, if not more spectacular as the more well-known starling gatherings, these murmurations are often a mixture of several species, usually dominated by enormous numbers of Knot. 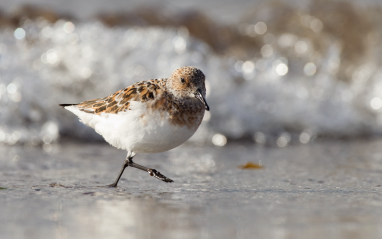 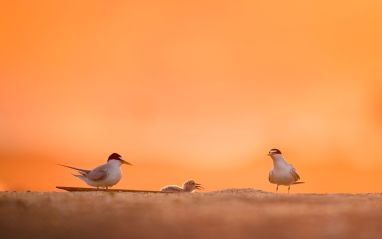 Between March and July, rare and declining beach-nesting bird species such as ringed plover, oystercatcher, little tern and arctic tern lay their eggs on the Bay’s quieter beaches, and struggle against weather, predators and human disturbance to raise their families before the summer ends.

But the birds of the Bay are becoming threatened by human activity. Previously peaceful coastlines are becoming busier with people, dogs and watersports. Birds waste precious energy escaping from people or playful dogs, and nests are accidentally crushed or abandoned. The result is an increasing decline in the numbers of birds seen on our shores. Resolving these issues, so that people and wildlife can coexist is what Morecambe Bay Partnership is working to achieve through our bird projects. Community volunteers and awareness-raising campaigns are helping to raise the profile of the birds of the Bay, highlight the dangers of disturbance and help everyone care for their local wildlife.

Curlew numbers are falling so fast that they may disappear altogether. Morecambe Bay Partnership volunteers and farmers have stepped in on a mission to protect their nests.

Find out how you can get involved with the Morecambe Bay Partnership and ways you can volunteer your time.